It’s not often I get the chance to review a product, much less a CCTV item! Today, I am reviewing the Amcrest 5MP UltraHD eyeball camera, or IP5M-T1179EW-28MM as the model code.

So here’s how this review will look… The synopsis and the box along with the core tech specs. Will also have the greatness, the good, the bad, and the fugly. At the end, some more technical talk. Click to scroll to what you want to read first, it’s worth your time. 🙂 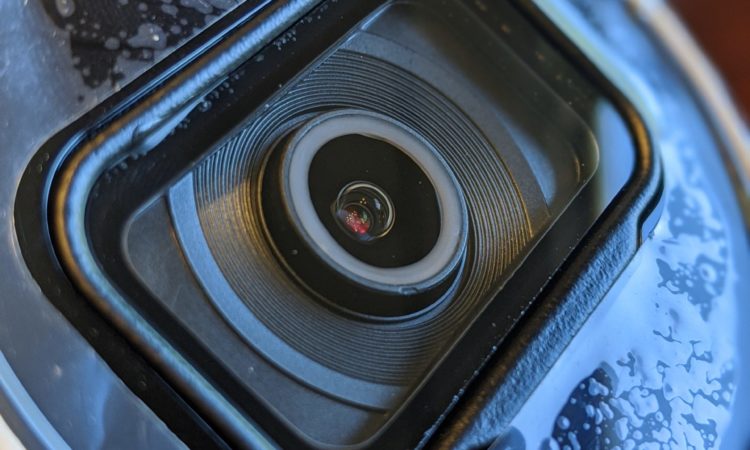 For starters, this eyeball camera is rather lightweight due to its aluminum build and plastic fitting. Many cameras that were of the bullet and eyeball variety that I’ve handled over the years always were a smidge on the heavy side and were prone to paint-scratches when rotating/moving the unit for positioning. With this camera, all of the unit except for the face of the camera is white…. very white. While the white might be jarring with the black front panel of the lens, it blends in well with most locations inside or outside on light-colored surfaces. The cameras’ video quality is fairly nice, however, there is some visible Chromatic Aberration with the IR cut with objects at a distance of 15ft or more that are on the far left and right sides of the camera’s field of view. The field of view on this camera is quite large (103 degrees large) – and covers a HUGE wide area. Unfortunately, this could lead to overtly wide objects with items closer than 2 feet to the camera sensor. One of the more notable drawbacks (for folks in the CCTV field) is that this camera appears to be a rebrand of a Dahua camera, but cheaper in cost. Overall, this camera with a price point of 60$ per Amazon.com (non-aff link) is a rather decent camera – the fact it supports H265 and POE af standard out of the box is a welcome breath of fresh air compared to older cameras and associated companies that didn’t take the time to futureproof.

Before considering this particular model, there are a couple notable items to this camera, and should be taken into consideration prior to buying.

Please note the Amcrest Cloud feature was not tested on this unit. My internet connection simply cannot handle the bandwidth required.

Audio/microphone is fairly straight-forward, either 8000 kbps or 16000 kbps audio channel – one way to the recorder software/hardware. The audio has a “warm” feeling to it, which isn’t a bad thing!

As per data reported by the UniFi Switch 24 POE…

There is no newer available firmware other than what was listed above.

ONVIF as requested by Blue Iris…

As you see above, it says there are no audio outputs! Unfortunately, Blue Iris at the time of writing this post doesn’t have formal support for this particular series.

You can set make to Amcrest and the Model to *ProHD/IP2/3/4K/4M Main Stream RTSP. This then makes the audio and video play nice. On the audio segment, ensure that the path parameter is empty and the format is RTSP. Uncheck the talk-support, this cam doesn’t have a speaker.

All in all, this is a very cost-effective camera. If you’re strapped for cash, and need a decent Power Over Ethernet camera with almost all the bells and whistles needed, do consider this camera. If you’re wanting to dig into the details of this camera some more, jump to page two and page three for pictures.

Welcome! This blog is just a small collection of articles from me (Brett), primarily to get various things to function.

As always, the legal: I take no responsibility if you ruin your computer, operating system or something simply fails to function while using any of the articles on this site.

If you've a question, leave it in a comment to the article.

Buy me a coffee?